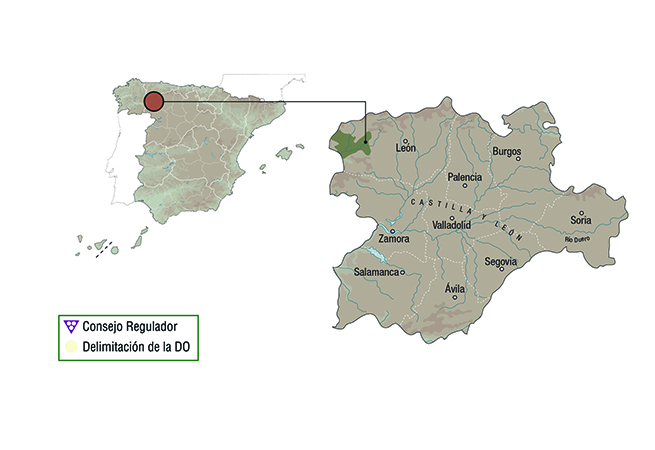 In the north west of the province of León. It covers 23 municipal areas and occupies several valleys in mountainous terrain and a flat plain at a lower altitude than the plateau of León, with higher temperatures accompanied by more rainfall. It may be considered an area of transition between Galicia, León and Asturias.

Quite mild and benign, with a certain degree of humidity due to Galician influence, although somewhat dry like Castilla. Thanks to the low altitude, late frost is avoided quite successfully and the grapes are usually harvested one month before the rest of Castilla. The average rainfall per year is 721 mm.

In the mountain regions, it is made up of a mixture of fine elements, quartzite and slate. In general, the soil of the Denomination of Origin is humid, dun and slightly acidic. The greater quality indices are associated with the slightly sloped terraces close to the rivers, the half - terraced or steep slopes situated at an altitude of between 450 and 1,000 m.